Who the Wild Things Are

In white American culture non whites are often portrayed as exotic, more sensual and overly sexual. As author and ad critic Jean Kilbourne points out in her documentary Still Killing Us Softly, non white women are portrayed in a way makes them seem less human. (Lazarus, 1987)

What is happening when we create and view these images? This blog will look at three different forms of media that all s 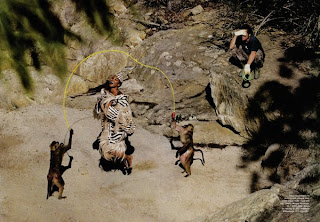 how black women as animals or in the form of an animal. These ads come from November’s Harpers Bazaar issue with Naomi Campbell. We will also be looking at an ad from a liquor company in the U.K., and lastly rapper Lil Kim on the cover of Vibe magazine.

Harpers Bazaar is a fashion magazine that caters to an upscale female clientele. It features the latest designs from luxury fashion lines as well as insider beauty tips and “$500 Steals” from high end stores. Most people featured in the magazine are white, and this reflects the consumers of the magazine. In this image model Naomi Campbell is dressed from head to toe in zebra print, playing jump rope with monkeys in what seems to be a zoo exhibit. She is being watched by a white man who seems like a tourist, possibly on Safari. This image shows the white man kneeling on a rock and observing her as if she is simply one of the animals in the wild, while she plays gleefully unaware of the man. It reflects a racial hierarchy; Campbell, a famous wealthy model is reduced to an animal. An animal to be observed and ultimately consumed by a white male. Not only are the characters in this picture important, but the camera placement seems to be part of the message as well. The male tourist is perched above Naomi Campbell which is a visual reflection of power; in this case the man has more power because he is above the woman. The audience is also situated in a way that has them above Naomi Campbell, looking down into her exhibit. 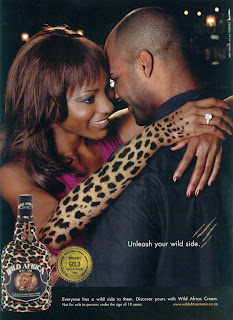 The second image is an ad for a U.K. liquor company called Wild Africa. This company is famous for turning people into animal like characters for their advertisements. In this specific ad we see a black couple in a simple embrace, however, in this ad the women is literally part animal. She seems to be turning into a leopard and, has already scratched her date. The tagline is “Unleash your wild side”. It seems as if this black woman is posed as someone who cannot control their animal instincts and will turn into a 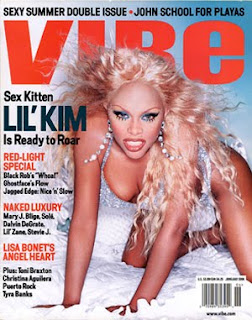 prowling beast if given the chance. There are also undertones of sexual promiscuity, although the woman is wearing what appears to be a wedding ring on her finger the ad makes it seem as if she is taking part in an illicit affair.

Lastly, the cover of Vibe magazine features female rapper Lil Kim as a wild cat like animal posing next to the title “Sex Kitten. Lil Kim is ready to roar.” Vibe is a magazine that caters to the black community as well as fans of Rap and Hip Hop music. It typically features articles on black music, fashion, movies, television and occasionally politics. Lil Kim is a famous rapper known for her vulgar lyrics and outlandish costumes; she is one of the few female rappers to have won a Grammy and to have crossover success in the music industry with collaborations with pop stars like Christina Aguilera. On this cover, Lil Kim is on her knees crawling, with her hair blown out into a full mane, her mouth with a snarl and her eyes designed to look piercing and very cat like. Unlike the previous ads, where women of color are visually compared to animals, in this ad, the woman is the animal. She does not just act like an animal, she is an animal.

This image is based on the philosophy Eugenics—where a black woman is constructed to be somehow different, and fundamentally inferior.

All of the above images are based on the philosophy Eugenics—where a black woman is constructed to be somehow different, and fundamentally inferior. Eugenics is the process of selective breeding, to breed the human population up by only mating the best specimens. In Eugenics the best specimen was thought to be the people who belonged to the superior race with the idea that these races were innately, even genetically better than the other races. The images in this blog are especially resonant within our culture. There is not a large representation of non-white men or women, and because of this limited representation, these images hold a great deal of weight. Essentially, non-whites have been symbolically annihilated. Women and people of color, women in particular, are portrayed, it is all too often in a way that metaphorically treats them as less-than human.