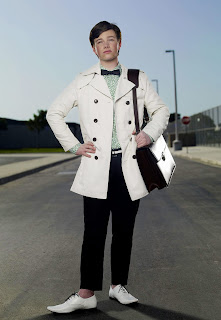 Television shows have come a long way over the past decade in regards to representing gays and lesbians. Since the 1990s, with the coming out episode of Ellen, gays and lesbians are no longer invisible. It is now easy to tell when someone is gay or lesbian on a television show. In this paper I will look at a fairly new televisions series, Glee, and one of its main characters, Kurt. Kurt is gay and loves singing, dancing, and fashion. While it is refreshing to see a gay main character, he is still stereotyped; he is, in f 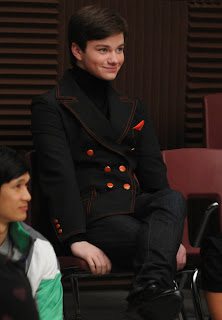 act a caricature, of a gay man who is a hyper-feminine consumer.

Gay man as consumer of fashion
On a recent episode of Glee he is asked to give Rachel, another member of glee club, a makeover. He does this at first just because “makeovers are like crack” to him, as he states on the show. He sees that Rachel is in desperate need of fashion advice. He then finds out that she wants to look better in order to impress a boy at school. Kurt is there for her heterosexual desires. By getting a makeover, Rachel hopes to get the attention from Finn, who is also a member of glee club. Kurt, however, has not yet had a love interest on the show and is desexualized. While other characters have relationships on the show, he is disregarded when it comes to relationships. His main focuses are on glee club and fashion.

Queer Eye for the Straight Guy is similar because each of the men on the show have a particular area of expertise such as fashion or interior design, while Kurt seems to be well-rounded in some of the topics on Queer Eye. In the same scene that Kurt gives Rachel a makeover, he makes a comment about the way her room is decorated, hinting at the fact he likes interior design as well as fashion.

In another episode Kurt learned and performed Beyonce’s “Single Ladies”. He then taught it to the football team and performed it in order to get himself ready for the field goal kick that makes them the winning team.

All of the other guys in glee club are straight and masculine (two members are on the football team) while Kurt, the only gay person in the club, is coded as highly feminine and flamboyant. There is no doubt that Kurt, played by Chris Colfer, is a popular character, but it may be hard to relate to him because he is so one dimensional. He was given a somewhat more serious storyline on one episode.

In this particular episode Kurt came out to his father and the audience was able to sympathize with Kurt and see that he was struggling with telling his father. However, it was more or less turned into a joke because when he told his father, his father told him that he knew he was gay since he was about three years old and wanted a pair of “sensible heels for Christmas”. Since this episode, there have been few serious moments. Even when they are somewhat more serious, there is still a joke wedged into the scene for comic relief.

While this was a more serious episode, the issue seems to be forgotten about for the most part. The issue is also depoliticized because the conflict is taken out. While gays and lesbians are more accepted in society, some still disagree. While it is refreshing that gay characters like Kurt have become more visible on broadcast television, the characters are too often portrayed as non-threatening comic relief side-kicks to the “more important” heterosexual characters. Unless television moves beyond these roles, it is likely gays and lesbians will continue to be marginalized.