Markanne Benich
By now, it is common knowledge that photographs can easily be re-touched. Often, this “photomanipulation” is so severe that the model no longer looks human, giving women an ideal that no one can ever reach. In this paper I will discuss why photos are edited and retouched to make a woman appear younger and thinner than they are, even when they may be a size two or four. Their skin always looks flawless and smooth, their make-up is beautiful and their bodies are thin. In the cover ad for the magazine, Redbook, Faith Hill looks gorgeous. Yet when looking at the original photo, th 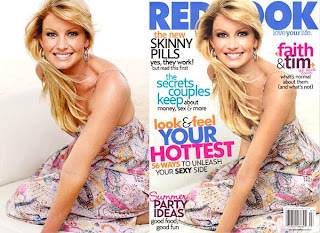 ere are some clear differences between the two pictures. In the picture on the right, the one that has been retouched, her arm is thinner, the wrinkles around her mouth are less apparent, her skin is flawless, her collar bone is less noticeable, and the top of her back appears to be smaller. This photo has been retouched so much when Faith Hill looks fine the way she is in the original photo.

More recently, there has been controversy over an ad for Ralph Lauren. The ad features model Filippa Hamilton. Even if an individual has never seen this model before, on can clearly tell that this photo has been altered. Her head is larger than her torso and she is extremely disproportionate compared to a real photo of her. Hamilton was angry over the p 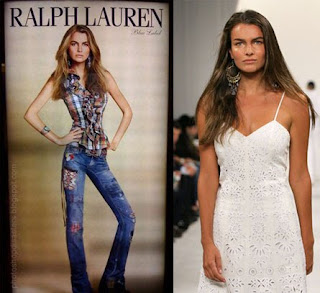 hoto when she saw it and in the end, the company let her go and told her that she was too big for their clothes, when she is only a size four.

Retouching and airbrushing does not only happen to pictures of women, but to men as well. While women are made th inner, men are made bigger and on the cover of Men’s Fitness, tennis player Andy Roddick is featured with large muscles. However, when looking at an untouched photograph, here it is clear that this photograph is manipulated. Roddick’s head and body do not match up. The copy surrounding this cover tells readers that they, too, can easily look this wa 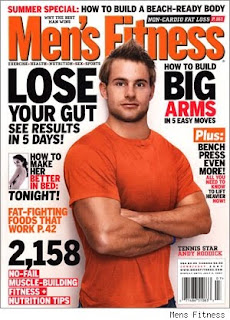 y. Something else that is noticeable in this ad is Roddick’s stance. He is standing with his arms crossed, which can sometimes give off a sign of aggression. Also, the titles of the articles that are in the magazine are all centered around losing weight and gaining muscle. One article appears to objectify women as it is titled “How to Make Her Better in Bed.” In stark contrast, the titles that are on the cover of Redbook are centered around losing weight.

The images presented here, and in the media in general, give both men and women a counterfeited ideal. The question that must be asked, then, is why are these images set up as the ideal? The answer, in part, lies with cultural notions of femininity and masculinity, and the dichotomy that is set up between the two. The ideal woman is small and weak, while the ideal man is strong, muscled and tough. Jean Kilbourne (1999) writes extensively about the way females are portrayed in the media and the effects it has on young women. She states that “even girls who are raised in loving homes by supportive parents grow up in a culture-both reflected and reinforced by advertising-that urges girls to adopt a false self, to become “feminine,” which means to be nice and kind and sweet, to compete with other girls for the attention of boys, and to value romantic relationships with boys above all else” (p. 104). The words surrounding Roddick are supposed to make the reader think that this is what women want, while the words surrounding Hill are supposed to make the reader think that this is what men want, while the ad featuring Hamilton is the epitome of horrible “photomanipulation.”
These hyper-masculine and hyper-feminine images serve the marketers because they are presenting an ideal that is unattainable. Men and women that want to look like this will continue to buy products to try and get the results they want, but ultimately will not reach them. This results in a constant state of consumption. Ultimately, products cannot deal with other qualities, such as spirituality, and happiness. Thus, the body is constructed as a site of change. Changing the body, we are told, will result in a change of self. However, this can never work, at least in the long term.

Works Cited
Kilbourne, Jean. “The More You Subtract, the More You Add: Cutting Girls Down to Size in Advertising.” Race/Gender/Media: Considering Diversity Across Audiences, Content, and Producers. Boston: Pearson Education, Inc., 2004. 103-109. Print.
Posted by Film Production at 7:46 AM