An Analysis of Women as Portrayed in “Pulp Fiction”


The media has long been shaping the image of women through television, advertisements, and video games. Television reality shows emphasize weight loss, beauty, and plastic surgery as ways to achieve happiness, and advertisements create an “ideal woman” image to sell clothing, cosmetics, sex, and materialism (Portwood-Stacer 196). Video games also create their own image of women. Women in these games are either “damsels in distress” or over-sexualized heroines with impossible clothing and body shapes (Portwood-Stacer 253). Movies are able to do the same thing; they expand upon widely accepted stereotypes of women such as, subservience to men, overemotional tendency, seductiveness, helplessness, and the idea that power comes from beauty. The movie “Pulp Fiction” uses stereotypical traits of the female gender to place women in the film in two categories: emotional, scared, and helpless, or controlled, powerful, and seductive. 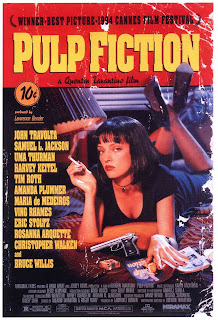 “Pulp Fiction” is an American crime file produced by Quentin Tarantino in 1994. It was nominated for seven Oscars, including Best Picture, and incorporated many star actors, such as John Travolta, Samuel L. Jackson, Bruce Willis, Christopher Walken, and Uma Thurman (Wikipedia). The movie focuses on a mob boss, his wife, his hitmen, a boxer and a few petty criminals whose lives are all eventually woven together in a string of seemingly unrelated (and not chronological) events.


As it is postmodern film about crime, “Pulp Fiction’s” characters are mostly male. The desire to be tough and to fight tends to be an overwhelmingly male trait, and thus males dominate the scene when it comes to crime and fighting. Due to its large male population, “Pulp Fiction” is a good film to study in order to see the stereotypes of women in the films’ time period, and a representation of women in or associated with crimes and criminals.


The women in “Pulp Fiction” are immersed in an American crime film in which they are either portrayed as helpless women attached to a stronger male figure, or powerful and individualistic. The movie is more focused on the male characters as they commit various crimes, but there are a few relatively prominent female characters as well. The most notable of these women is Mia Wallace. Played by Uma Thruman, Mia Wallace is the wife of prominent gangster Marsellus Wallace (Ving Rhames) (Wikipedia). She is the dominant female character in the movie, and is portrayed as the “femme fatale;” a beautiful, powerful, intelligent, and seductive woman. The poster for the movie supports this; Mia Wallace’s character is posed on a bed, while wearing a seductive look and stiletto heels. She is smoking a cigarette and a gun is lying in front of her, both of which are societal power symbols. The cover for the widescreen edition of the movie also includes a quote next to Mia, reading “Girls like me don’t make invitations like this to just anyone.” Obviously, Mia is a character with a good deal of power in the storyline of “Pulp Fiction.”


Throughout the movie, Mia’s authority is expanded upon. Vincent Vega (John Travolta), a hit man working for Marsellus Wallace, is asked by Mia’s husband to escort his wife while he is away. When coming to pick Mia up for a night out, Vincent in obviously nervous. While this may be due in part of Mia’s high status as wife of Vince’s boss, Mia plays her own part in Vince’s state. She toys with him when he enters her home, both intelligently and seductively. During dinner, Mia has control over the scene; she is the more important figure and Vincent is subservient to her, doing whatever she requests. Mia is the lone powerful and influential female character in “Pulp Fiction” because she is portrayed as beautiful, influential, intelligent, clever sand seductive. Ironically, later in the movie she mistakes heroin for cocaine and overdoses, becoming the helpless woman figure that Vincent has to rescue from death.

In comparison to Mia Wallace, the other two prominent women in “Pulp Fiction” are fragile and weak. Yolanda (Amanda Plummer), also known as “Honey Bunny,” is part of a scene in which she and her husband, Ringo (Tim Roth), try to rob a restaurant and its patrons. Unlike her husband, Yolanda cannot keep control of herself during the robbery. She is loud and frantic, obviously scared but still trying to keep control of the room. Instead of an adult, she sounds like a child a points, saying “I gotta’ go pee” and “I wanna go home” in a frightened, high pitched voice. Samuel L. Jackson’s character, Jules Winnfield, treats her as if she is a child. He talks down to her, telling her to calm down that he is “proud of her” and that her husband is also proud of her for not shooting anyone. Yolanda’s actions are sharply contrasted to Mia’s, as well as to the actions of Jules and Ringo. Yolanda is small, childlike, frantic and frightened, not calm like the men in the scene (even Ringo remains calm though Jules has a gun pointed at his face). She is portrayed as weak and out of control, not strong and controlling like Mia. Even her nickname, “Honey Bunny,” de-maturates her.

Along with Yolanda, Fabienne (Maria de Medeiros) is also portrayed as a weak, childlike feminine figure. Fabienne is the girlfriend of Butch Coolidge (Bruce Willis), a boxer running from hit men (Wikipedia). While he is masculine and strong, Fabiene is small, slim, and childlike. Butch speaks to her softly and simply, reassuring her when she is worried. Typical societal male dominance is also shown in a scene in which Butch becomes angry and beings throwing objects around a room. Fabienne cowers in the corner of the room, completely powerless and at the mercy of Butch’s anger.


Both Yolanda and Fabienne, the weak female characters, differ from Mia in their appearance as well as their actions. Mia seems darker in a sense, with black hair, darker skin, red lipstick and typically dark clothing. Yoland and Fabienne appear weaker, wearing neutral colors such as tan or white, no makeup, and have softer features. Mia is also the most attractive, adding to her authority because society tends to equate beauty and power.
Yolanda, Fabienne, and Mia fall into two categories of women represented in the movie “Pulp Fiction.” Mia is characterized as the seductive, powerful, beautiful, independent and possibly dangerous woman, while Yolanda and Fabienne are helpless, male-dependent characters. Their physical features, clothing, make-up, actions, the scenes they are placed in and the characters that surround them all contribute greatly to the way these women are categorized. The two types of women seen in this film and the actions they perform are stereotypical societal ideas of women; a woman is either a powerful seductress or helpless, innocent child – there is no in-between. Because of this, “Pulp Fiction” is not only entertaining viewers with acts of crime and redemption, but it is also making viewable the ways in which society categorizes women.