How to Be a Beautiful Black Woman: White-Washing Celebrity Spokesmodels

If celebrities like Tyra Banks, Halle Berry, Rihanna, and Beyoncé have to be altered for advertisements, just what does it take to be an “ideal” beauty? In the case of the four afore mentioned cosmetic models, their shortcoming is apparently that they are not White enough. Despite already being what is considered “light-skinned” for African-American women, their true appearance is still not deemed appropriate for cosmetic ads. While it’s likely no ad for L’Oréal, Cover Girl, or Revlon goes “untouched,” it is what is retouched in these ads that make them questionable. After a recent debate over the cover of the book, Liar, Young (2009) makes the observation: “In the history of the marketing of black art, racism and biases towards lighter complexions have been collaborators.” She further asks “Why is disguising or watering down the ethnicity of the cover model still a marketing tactic in book publishing and in other aspects of popular culture?” This blog will explore the beauty advertising aspect of popular culture under the contexts which Young mentions, and the implications of this “watering down.”

While Tyra’s Cover Girl ad looks about the same as other photos taken of her outside of a photo shoot, her skin color is striking in the ad. As one of the darker light-skinned African-American women to be accepted by the media (as a model first, then an actress and now media personality), she is certainly lit in a way that changes her skin color from its natural appearance. While the change is not so dramatic that one would assume she is digitally “white washed,” it does seem as though there was attention paid to lightening Tyra. The ad also does not focus so much on Tyra’s face as the others do, which could be why her deeper color is permitted. Here, Cover Girl is selling nail polish.

Revlon, however, is selling face makeup with their Halle Berry featured ad. At first glance, the model could be mistaken for White actress Sandra Bullock. While Halle is of mixed race, accounting for some of her more Caucasian features, she still was apparently not White enough for this ad. She is positioned in a way that completely alters the shape of her nose. She is also lit so that her light complexion is even fairer. Her eye shadow, blush, and lip color are all in shades of what the cosmetic companies often call “nude” which is really only the color of Caucasians when they are nude.

This brings us to Rihanna, R&B recording artist and light-skinned Black woman from Barbados. In both of these ads for Cover Girl, her complexion is lighter than in reality. As with Halle, Rihanna is made-up to look more White. Her natural lip color is masked by icy pink lip gloss while peaches, taupes, and all things light transform her look. The irony lies within the second ad, which advertises foundation; it says “TAKE OFF THAT MASK!” It would be very surprising if the foundation color they matched to her skin in the ad came anywhere near what she’d use in real life. Furthermore, that foundation must really work magic – it changes facial features! The curves of Rihanna’s nose are dramatically softened in these ads, particularly in the second one.
Finally, there’s Beyoncé. While her hair color, part of the package L’Oréal is trying to sell here, dramatically lightens the ad overall, it is not the only thing that is lightening Beyoncé’s look. Her skin color must have been altered by a computer because the contrast between what’s real and what’s in this ad is striking. Her nose and overall facial features are bony, closer to those of White models like Kate Moss than to those belonging to Beyoncé’s naturally fuller face. It even looks as though her mouth was positioned a certain way as to not make her smile look “too Black” – and 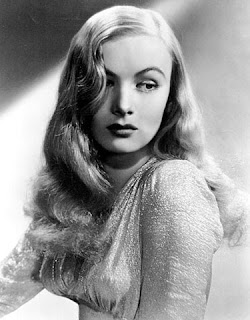 her lips are of course colored “nude.” While the non-ad photo doesn’t show it very well, Beyoncé does have a naturally big smile. This ad seems to attempt to make her mouth look smaller or even just take all focus away from it, making it invisible. While the second ad highlights her lips, clearly selling red lipstick, this image looks strikingly similar to one of Veronica Lake, a White 1940s actress. 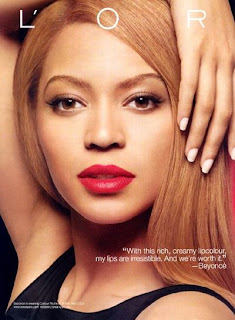 While she may have been the inspiration, and a revisionist Black Veronica Lake ad may have been otherwise acceptable – it just doesn’t make sense that an African-American woman looks almost identical to a White woman in an ad – from her facial features to her hair – when in real life any visual likeness does not exist. Not to mention, while Beyoncé is allowed to be a little darker in the second ad, she still does not resemble her true color.

When Essence, a Black beauty magazine, held a panel last spring, they discussed the female African-American cosmetic consumer. Makeup artist Sam Fine “believes African-American women are looking for affirmations of their own beauty through seeing spokespersons or models of color in ad campaigns for beauty products.” The panel also said that African American women are more likely to buy high-end products such as “Chanel lipsticks and Versace perfume” rather than brands like Cover Girl and L'Oréal which have celebrity spokeswomen (Smith, 2009). While the reason could simply be that these products are better quality, there could also very well be a connection between the above ads and ones similar to them and what brands African-American women are choosing to purchase. While it is possible that African-American women do look for Black spokeswomen to affirm their beauty, they’re not finding ones that represent them, so they don’t buy those products. The ads don’t speak to them. When Black celebrity models are altered to look Caucasian in advertisements, there are clear messages there.

According to Collins (2000), the “prevailing standards of beauty” in media favor skin color, facial features, and hair texture that are closest to those of a Caucasian woman. In fact, she argues that blue-eyed, blonde, thin women are most favored, and that this is because they are not the Other: “black women with African features of dark skin, broad noses, full lips, and kinky hair” (Collins, 2000, p.89). With this ideology, those that are considered the “most Black” are the least beautiful and thus, Blacks who can be considered the “least Black” are most beautiful. This social construction permeates beauty and cosmetic advertisements as exemplified by the six above featured print ads. Sengupta (2006) reasons:

For White women, the pressure to be attractive may be contingent upon cultural factors such as weight, but for Black women and other Women of Color, the pressure to conform is doubled — first with the expectation to be thin, but also with the impossible expectation to be White.
Here, Sengupta helps to illustrate the implications of these ads. In a video by Kira Davis (2005), young African-American women were asked about standards for “girls like them.” A few of their observations were, “You’re prettier if you’re light-skinned” and “When I was younger, I considered being lighter as a form of beauty.” Advertisements like the ones above perpetuate these views. Among other insinuations, ads featuring Black celebrities suggest that ‘This is what successful African-American women look like. If you don’t look like this, you don’t stand a chance.’ When image after image featuring “successful” black women portrays them all in a certain way, women will inevitably look at that and compare themselves. When choosing who these successful black women will be, there is obviously a bias toward light-skinned women. Tyra, Halle, Rihanna, and Beyoncé are all naturally light-skinned Black women. But these ads throw that into the spotlight. They say not only should our models be as close to White as possible, so should our actresses and artists – at least the ones who are going to be mainstream beauty icons.
Works Cited
Collins, P. H. (2000). Black feminist thought: Knowledge, consciousness, and the politics of empowerment. New York: Routledge.Davis, K. (Director). (2005) A girl like me. Retrieved October 1, 2009 from http://video.google.com/videoplay?docid=1091431409617440489#
Sengupta, R. (2006). Reading representations of Black, East Asian, and White women in magazines for adolescent girls. Sex Roles, 54(11/12), 799-808. Retrieved October 1, 2009 from http://search.ebscohost.com.proxy.ohiolink.edu:9099, doi:10.1007/s11199-006-9047-6
Smith, S.D. (2009, May 19). Essence panel explores beauty purchasing. Women’s Wear Daily, Retrieved October 1, 2009 from http://www.wwd.com/beauty-industry-news/essence-panel-explores-beauty- purchasing-2139829?src=bblast/051909
Young, C. (2009). Why do we need white faces to sell black books?. The Grio, Retrieved October 1, 2009 from http://www.thegrio.com/2009/08/controversy-has-erupted-this-week.php
Posted by Film Production at 11:26 AM