Burger King has a history of creating controversial commercials. For example, its television ad for the Texican Whopper, which debuted in early 2009 in England and Spain portrays a Texan and a Mexican being friendly and doing things together. The problem is that the commercial portrays the Mexican as a short wrestler wearing a cape and a facemask, while the Texan is tall and masculine. The Mexican’s name in the commercial is “Just a Little Bit”, playing into the stereotype that Mexicans are short.


While this ad certainly caused controversy among Mexicans, the print ad was a big 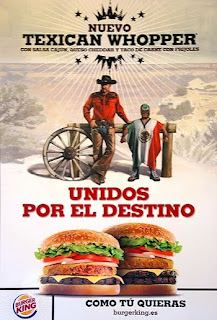 ger problem. The Texan looked just like he did in the commercial. However, the Mexican was plumper and was wearing the Mexican flag as his outfit. This was very controversial because in Mexico there are rules on how the Mexican flag can be used. In an article posted online about Spain’s reaction to the commercial and print ad tells why Spain is angry with the major fast food chain. Jorge Zormeno, Mexico’s ambassador to Spain, said “We have to tell these people that in Mexico we have a great deal of respect for our flag.”


The slogan for the commercial is “The taste of Texas with a little spicy Mexican.” Some people took this as making fun of Mexicans because of the stereotype that they are short. Furthermore, the Mexican is cleaning the glass window, thus reiterating the stereotype that they c lean as a profession. Clearly the ads are ideological and present stereotypes that can ultimately lead to prejudice and discrimination.

This ad campaign plays into the symbolic annihilation of Mexicans because it trivializes their culture by representing it with a short, Mexican wrestler while the Texan is represented by a tall, masculine man. Also, while the Mexican is wearing the country’s flag, the Texan does not wear the flag of Texas or the American flag. If the Texan were to wear the Texas or American flag it would go against rules in America as well. says that it is okay to go against Mexican customs but not American customs. Furthermore, the Texan does not wear anything that gives him a second role. He is simply just a man dressed in cowboy boots and a hat. The Mexican is given a comedic role while the Texan is given more of a serious role. The implications of these ads are that Mexicans are trivialized as short and needing help, comic wrestlers, professional cleaners, and as having a culture that is not important. Therefore, these ads are contributing to their symbolic annihilation.
Posted by Film Production at 9:44 AM