Being Black in the New Age of Rap 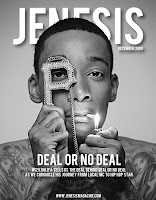 Wiz Khalifa, a 23-year-old Pittsburgh native, was born September 8, 1987. He started his career off in 2006, with the release of his first album, “Show and Prove.” The following year Wiz got signed to Warner Bros.

Records, where he released his second single, “Say Yeah," sampled from a very popular techno song by Alice Deejay called “Better off Alone.” “Say Yeah,” not only received radio play, but it also made the Rhythmic Top 40. What people don’t know is Wiz is more than just a successful rapper; He is avid communicator with fans, staying in touch through blogs, YouTube, Twitter, Facebook, and other third party music networking sites. Then suddenly after his Two years of success Wiz’s relationship with Warner Bros. Records suddenly ended. Upon his departure, Wiz released his second album, “Deal or No Deal,” and then followed up with released the mixtape “Kush and Orange Juice.” Instantly Wiz became the top trending topic on Twitter and Google and was offered a record deal from Atlantic Records. Clearly, Wiz is a popular hip-hop artist. While, in the past, artists have promoted violence and drug use, Wiz is much more overt, signifying a change in the music culture. In this paper I will discuss Wiz Khalifa, paying particular attention his use of marijuana, and how he represents a particular construction of black masculinity.

Throughout the video, Wiz and his possy smoke marijuana heavily, as if their status allows them to disobey the laws on illicit drugs. Their attitude toward smoking shows an independence from social norms and mainstream society. In fact, in the first frame of the video Wiz is holding a joint. Later there's a scene where Wiz’s friends are on a couch laughing as if it’s the marijuana in their system that makes everything better. The significance of drug use in hip-hop artists today creates an inattention to authority and brings males from different socioeconomic statuses together, where once this would never be accepted. However marijuana illegal, still appears in all the music videos. Constructing drug use as the norm for the subculture that he represents. Years ago this would never happen; the closest thing to a drug would be tobacco. For example, in the 90’s, a west coast rap group known as N.W.A. became popular for their explicit lyrics about drugs and violence. However, not once did drugs appear in their music videos. The progression in music videos goes to show how fast America has grown as a culture. Now what were once explicit lyrics is now the realism of seeing actual drugs and violence in the video.

Drugs, tattoos, jewelry, designer clothes, and swagger are some characteristics that emit from being black in this new age of hip-hop. Males specifically have trouble relating with one another. This video is a perfect example of males bonding negatively. No longer do we see men watching football games together, or consuming drinks at the bar, we see males hanging out at the local park smoking pot out the back of a truck or a bunch of boys hanging out at home taking bong rips. This infatuation with material goods is consistent with every artist in this new age of hip-hop too. No longer are women just the objects of attention; we are exposed to million dollar homes, exotic cars, and private places. He gives mention to his sexual preference in women too. Then overly boasts in the confidence his jewelry gives him, and laughs at his intentional recommendations for marijuana. Though he gives mention to woman, rarely do you see one in a video, but if a female is visible then she is more so a prop to balance out the mixture of people, not a item to worship because of her stunning appearance. The males however, are constructed as…. Acc

ording to the Kirkland, such actions taken by artists like Wiz Khalifa appear to be somewhat of an in-your-face boast. Otherwise, glorifying guns and street hustling (Kirkland).

The portrayal of drug use shows an independence from social norms and mainstream (white) society – where someone who looks like this would never be accepted anyway.


After reading the lyrics and a short recall of Wiz’s stomping grounds, Listeners are forced to assume that Wiz is giving reference to his home team, the Pittsburgh Steelers. This is song can be considered as a shout out to his homeland, but as you read the lyrics the song becomes more stereotypical and commercial. The first verse begins with Wiz talking about the pain 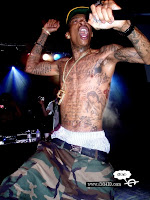 t job of his car, and then progresses with this arrogant remark. “The niggaz scared out of it, but them hoes aint,” (Wiz). And throughout the song his lyrics continue with the making of arrogant statements. On the other hand, one must notice these things, more specifically, acknowledge the stereotypical references of the black community and blacks in this new age of hip-hop that are embedded in his lyrics.

Conclusion
Throughout the video, males are seen smoking out of bongs, exchanging blunts with Wiz, and overall just enjoying the presence of one another in the midst of marijuana. However, these concerns do not reflect the reality that most African American’s live, where more than 15 percent are unemployed (as opposed to 8.8 percent of Whites). Without the existence of illicit drugs like marijuana, young males might find a reason to
Posted by Film Production at 1:41 PM