Black, White, and Racist All over: An Analysis of Interracial Couples in Film.

Film is a pedagogical tool that teaches our society about relationships. The romantic comedy genre, in particular, is the most prevalent genre that is exploited in films. Typically, the target audience for modern day romantic comedies films is young females, (Stoneking, 2010). However, a substantial amount of males are also exposed to these films. These films somehow subconsciously, yet blatantly teach our audiences particular ideologies about love and relationships. These films build an ideology of what love is supposed to look like, and what an ideal and socially acceptable couple is supposed to look like. Overwhelmingly, it appears that relationships are habitually between the same racial demographics. Couples in films of different socioeconomic classes are depicted to be socially acceptable. The exact opposite can be applied for interracial couples; the media depicts interracial couples as being out of the norm. When interracial couples are involved, their relationship becomes the conflict of the film, and the film’s narrative then centers around this constructed problem. This analysis will further elaborate on the film “Guess Who.” This film was selected because it is the most recent film in which portrays interracial couples. This film’s narratives also deal with the “problem” of enduring an interracial relationship.

It is a valid argument to imply that our society does see some interracial couples in mainstream films; however, how many of those interracial couples are dealing with a problem other than simply being? The film “Guess Who” will accurately demonstrate this question. The film’s tagline is indiscreetly thought provoking. The tagline states “Some in-laws were meant to be broken” (20th Century Fox, 2005). While this tagline is visibly direct in context, meaning that Theresa’s parents, or, the in-laws need to be broken; however, it appears there is an unresolved underlying message. The term in-law is seemingly identical to the word laws; the law being a taboo for interracial couples, and that is the law that is meant to be broken. The tagline alone is insinuating that racism is an unwritten law of our society, and our society is consciously aware of this. Although the tagline does not directly imply this, it is exposed to our society as a double entendre. Audiences are also made aware that this tagline can have two interpretive meanings. 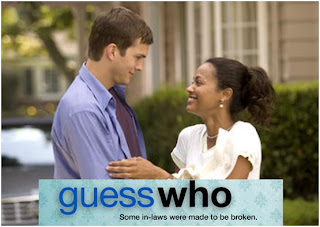 In the film “Guess Who” the premise is another example of interracial taboo. The film portrays a young, Caucasian male, Simon Green, who is engaged to an African-American female, Theresa Jones. The conflict of this film is that Theresa’s family is unaware that her fiancé is white; and this, is a problem (20th Century Fox, 2005). The film’s entire premise consists of the dilemma of if the Caucasian male will finally be accepted into the African-American family. There is one scene, in particular, in which depicts universal racism; “black jokes at the dinner table.” In this scene, Simon Green is sharing dinner and stories with Theresa’s family. Theresa’s grandfather is rather racist and upset that she has not chosen an African-American man. Shortly after, Simon interrupts and declares that his grandmother, in fact, holds a similar racial attitude for Theresa. Simon and Theresa both laugh the comments off, and assign the racism on a generational gap. There are several moments of awkward silence, and then “black jokes” is the next topic of conversation. Dinner takes a turn for the comedic better, however, results in an unfortunate conclusion when a joke takes a turn for the worst. Simon begins by sharing seemingly light-hearted jokes that Theresa’s family humorously excuses as “cute.” Oblivious to the African-American cultural, Simon shares a joke that demeans the character of Theresa’s father and grandfather, and the evening ends in silent disaster. This scene acknowledges that the racism is as equally prevalent in the Caucasian culture, as it is on the African-American culture. Racism is an action that impacts individuals on a personal level, and is experienced differently depending on each person.


Another common trend that is portrayed throughout films containing interracial couples is the set up of a black female paired with a white male. In films, the black female is portrayed to be weak, and defenseless, and the white male is portrayed to be dominate and hero –like. All movie posters are portrayed in a manner that the black female is weak and is in need of rescuing, and the white male is willing to step up and rescue her. This trend is not only racially stereotypical, it is gender stereotypical. Women are portrayed to be weak. Having a film with a weak black female is not only weakening a gender, it is weakening a race. So, when considering interracial couples, why is the female typically African-American, and the male is typically Caucasian? Perhaps it is an inaccurate stereotype that the Caucasian males are perceived to be dominate, and African-American women are perceived to be passive. 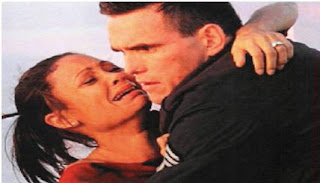 Considering an article on the 2005 film, Crash, it states “In this frame, a wealthy, light-skinned black- woman named Christine clings to a strong, comforting policeman named Ryan. Her wedding band figures prominently in the image, and her face is a mask of distress, shock, or grief But otherwise, the embrace seems intimate—almost erotic; their lips just shy of touching, the couple seems on the verge of kissing (as couples tend to do on movie posters). Ryan's face, too, seems guarded, a mask of determination—of heroism, really, for Ryan has just risked his life to drag the woman out of her burning, overturned car, and despite his fellow officers' attempts to pull him away. The sequence leading up to this shot emphasizes Ryan's heroism” (Hsu, 2). Again, this photograph depicts a weak African-American female being rescued by a Caucasian male, perceived to be a hero.