“In many ways the 1990s and early 2000s have been a boom time in television’s presentation of gay, lesbian, bisexual and even transgender people.... Queer life is no longer simply a subject of interest to those who live it, but has been newly commodified for straight eyes.” (Stempel, 2004,2010). 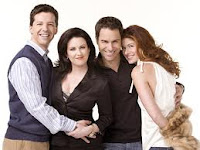 In ‘Will and Grace’, the character of Jack is an extreme stereotypical representation of a gay male. “Camp is p 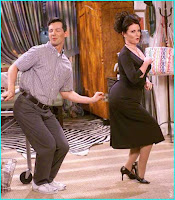 opular in portraying homosexuality on television as it takes segments of the mainstream culture and in many ways can be seen as humorous by both homosexuals and heterosexual viewers.” (Wood, 1996)

Jack appears to be over-excitable, enthusiastic and obsessed with icons such as Cher. His character is a commodity for the audience, as he is for pure entertainment and comedy.

“Today, if a gay male who is coming out turns to the gay media, most likely what he will find is that to be a homosexual in today’s society is to be a masculine young white male, with a well muscled body and handsome face, a good education and a professional job,” (Raymond, 2003).

Will isn’t as stereotypical as Jack; he appears to be more masculine and conservative in his traits such as: he is successful and steady in his law career, he is not represented as ‘over-excitable’ as the character of Jack. He is a safe representation for the show, as his stereotype isn’t as extreme as Jack’s over-sexed personality.


This contrast between the two characters reiterates the ideology of masculinity – where those with more masculine traits are more likely to be successful, than those who are stereotypically homosexual. 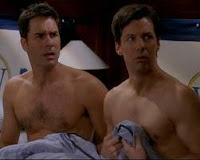 Will lives in an apartment with Grace as an ‘unconventional family’, and even though they aren’t officially together in a heterosexual relationship, it is their friendship, partnership and the fact that they live together that makes up for it. This shows that the hegemonic ideology is to have a male and female couple relationship in order to be supported and to be successful.

Wood, M. (1996, December). The Portrayal of Gays and Lesbians on TV. Retrieved from Aberystwyth University : Gender.: http://www.aber.ac.uk/media/Students/mtw9402.html
Posted by Film Production at 9:59 AM