This instrument can teach, it can illuminate; yes, and it can even inspire. But it can do so only to the extent that humans are determined to use it to those ends. Otherwise, it is nothing but wires and lights in a box.
— Edward R. Murrow
99% percent of U.S. households have at least one television set while 50% of American adults cannot read above an eighth grade level.

Each year Americans watch around 250 billion hours of television.

It’s not breaking news to Americans that we watch a lot of television. Since the creation of television people have been fascinated by it and its array of endless possibilities. However, it is no longer used as just a “form of entertainment.” It has evolved into a tool for learning and a source of communication between people all over the world.
Though television is a way to broadcast information and entertain us, it also has the ability to influence us in ways no other medium can. This gives television a power and an impact that is very hard to ignore. It also allows us to experience the world around us while introducing us to knowledge or opinions we might otherwise never have encountered.
“Glee”

This brings me to the TV show Glee and the influence it is having on an ever-growing audience. As I have pointed out, one would be hard-pressed to ignore the influence television has on Americans. And now, one would also be hard-pressed to ignore the influence Glee is having on the young adults who worship it. (“Gleeks,” as they call themselves.) The story focuses on a group of excessively different students who are brought together, against their will, to sing in that historically nerdy “ High School Glee Club.” However, those differences end up bringing the students together to form the “Glee family.” And it’s a diverse family at that. But Glee is not about the triumph or recognition of the “high school loser” as one would think. They have instead made it the appreciation of the high school individual. I say "individual" very specifically because Glee has been so fantastically un-specific in its array of featured char acters. For example, Glee currently includes the only wheelchair bound character on primetime television. The main cast also includes teen moms, Asian, Latino, gay and African American characters, alcoholics, a young girl with Down syndrome, and a Jewish girl with two gay dads. However, Glee has managed to turn these traits into attributes for its characters.

Artie Abrams, is looked up to for his struggles and intense determination on Glee but is still treated like every other kid on the show. In the episode titled “Wheels,” of the first season, the students even decide to spend a week in a wheelchair to understand Artie’s day-to-day life better. They wrap up the episode by performing a musical number in their wheel c

hairs to honor their friend. Artie has even had a few love interests with various characters on the show and in the current season actually joined the football team! 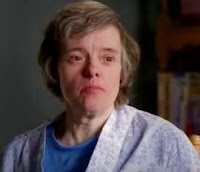 in Trocki, portray significant roles as characters with Down syndrome. Becky is mean cheerleading coach, Sue Sylvester’s favorite cheerleader while Jean is the all-knowing sister she goes to when she is at her worst and needs advice. They show the positive side of Sue’s character, as she isn’t very positive a

nd help the rest of the characters to understand the heavier things in life.

Kurt Hummel, (played by actor Chris Colfer) is the fashionable, misunderstood guy who is struggling with the need to come out to his father and b

e accepted by his friends for who he is. Which of course they do without a second thought, but Kurts emotional confrontation with his father was quite the tear jerker, for anyone that has felt misunderstood or like they are living a lie. Though Kurt’s character is an openly gay young man who is unafraid to show his true self, he has definitely had moments of self-doubt. This led to a few episodes on the football team and even some on the cheerleading squad. In the end though, Kurt learned to stay true to himself and that is what made him happiest.
Impact
There is no doubt that Glee has made strides to include a diverse cast, but the show (now in its second season) has continued to include a more diverse mix of topics as well. Last season the show dealt with teen pregnancy, alcoholism, kids coming out to apprehensive parents, cheating spouses and sex. This season the kids have already dealt with religion, a little more sex, some LGBT issues and of course, jealousy. It’s looking good for season 2 of

Glee especially with that coveted timeslot of primetime Wednesday nights (7.5 million people tuned in for season 1 and with two episodes down in season 2 there have already been 12.3 million viewers) it looks like even more people might benefit from its diverse flavor. Especially, the younger viewers for which there are not numbers out yet, but have made themselves known at concerts, events and filmings of the show that they love. Glee recently won The Hollywood Diversity Award, as well as another award from The Multicultural Motion Picture Association, here’s to earning a few more!


Posted by Film Production at 6:18 PM