How evident are racial stereotypes within children’s entertainment and how influential are they?

“A widely held but fixed and oversimplified image or idea of a particular type of person or thing.” – ‘Stereotype’ Oxford Dictionary (Dictionary, 2010)

The Media are an important aspect of our lives: we use it for both entertainment and news or information. It is found that “According to the A.C. Nielsen Co., the average American watches more than 4 hours of TV each day (or 28 hours/week, or 2 months of nonstop TV-watching per year). In a 65-year life, that person will have spent 9 years glued to the tube.“(Herr) We like to think that the TV shows and films we let children watch are purely for entertainment, but there could be subtexts that influence children’s ideologies and perceptions of different races.

“Once a company that catered primarily to a three- to eight-year-old crowd with its animated films, theme parks and television shows, Disney in the new millennium has been at the forefront of the multimedia conglomerates now aggressively marketing products for infants, toddlers and tweens (kids age eight to twelve).” (Giroux, 2010)

Disney is important to study because, overtly, it represents itself as a source of escap

ism and fantasy. However, it is important to note that this seemingly innocent company is a multinational corporation, and much of it’s focus is on children’s programming and products. Children are more vulnerable to media texts than adults and forming their own ideologies based on what they see at a young age. Also, how these ideologies will form their outlook on cultures and societies later in life.

TV and film entertainment is easily accessible, so there is an ongoing and long term effect that can be cumulated. According to (Giroux, 2010) “Multi-billion-dollar media corporations, with a commanding role over commodity markets as well as support from the highest reaches of government, have become the primary educational and cultural force in shaping, if not hijacking, how youth define their interests, values and relations to others.”

Clearly, the representation of race can have a long term and unconscious effect on children, and how they form ideas about others and themselves. Disney is persuasive in forming these ideologies because of its pervasiveness in childrens culture, it is a powerful hegemonic tool. I will focus on representations of African Americans within Disney films, as well as focus on how Native Americans are represented, as previously there has not been much a 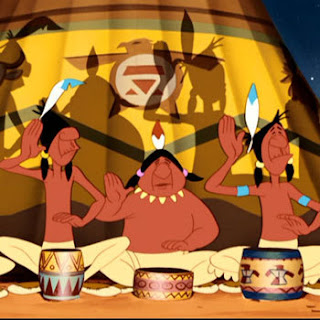 This clip from the Disney cartoon ‘Pocahontas’ (1995, Mike Gabriel) shows the English colonists trying to gain Native American land after John Smith a soldier has been taken captive by the Native Americans. The song ‘savages’ that the colonists sing refers to them as ‘not even human’ and ‘they’re different from us and cannot be trusted’ even though they are invading their land. Even Pocahontas herself is featured to have a reddened skin colour. This representation could give children a prejudice or a negative stereotype of Native Americans by giving them the representation of being aggressive and violent, creating dominance with the English settlers. The characters clothing makes a difference as to how they are represented, the settlers have tops, trousers and shoes in contrast the Native Americans who are wearing cloth-like material. This creates an opposition in wealth and prosperity between the two races.

children’s films and cartoons of them being primal and bellicose. One of the Americans asks them “What makes the Redman red?” This creates awareness with the audience, who are primarily children, of the Indian characters skin colour. All of the characters then take part in a dance, and they make stereotypical expressive forms of whooping and screaming noises, which are easily mimic able by children. Nancy Eldredge states “And when young children prepare to dance and sing the way they see Native people do, they'll jump all around and kick their feet and flail their arms and have no idea what they are doing. What they are doing, without realizing it, is making fun of us.” (Picker, 2001) People who have Native American ancestors find these representations offensive to their heritage, but because they are a minority Disney is more able to ‘get away’ with these stereotypes.

‘The Lion King’ (1994, Roger Allers) is a popular and favourite Disney animation winning an Oscar award for its soundtrack and voice acting. But there is evidence that there could be racial stereotyping within the film. Throughout the film there are themes of segregation, father-son relationships as well as life and death. The theme of segregation is evident through the animal characters of the lions and the hyenas. The lions live in a kingdom, whereas the hyenas live in the badlands and they are not allowed into the kingdom. Their representation is physically similar to the representation of the African American ‘Black Sambo’ stereotype. ‘The hyenas resemble this stereotype. They have bulging eyes, protruding lips, and as Scar describes them, “Vacant expressions.” They laugh hysterically and loud all the time. Two of the main character hyenas show some intelligence, but the hyena, Ed, is the ultimate Sambo. He never speaks; he just laughs and laughs, and wags his protruding tongue like a rabid dog.’ (Rockler-Gladen, 2004, 2010)


In the documentary ‘Mickey Mouse Monopoly’ (Miguel Picker, 2001) Jacqueline Maloney states “I have a girlfriend who, she's a white woman and her son is about three, and she came to me one day 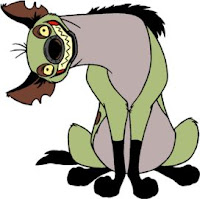 really disturbed and said that she had been coming back from shopping and that her son said, “Mommy, Mommy, the hyenas, the hyenas,” and she looked up and she said there was a group of black children on the carousel and playing... she could not move her son away from the attachment of the sound to the image of hyenas in The Lion King.” (Picker, 2001)

Disney may not have intended this representation to be of racism, but becaus 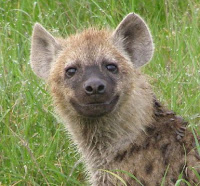 e the original ‘Black Sambo’ representation was seen as entertainment, then that is the intention of the hyenas, to be just entertainment The creators may have just wanted one of the characters to appear extremely stupid, and this is the stereotype that is coming across, but the hyena representations do show evidence of that of the ‘Black Sambo’. “Cultural differences in Disney's recent films are expressed through a "naturalized" racial hierarchy, one that is antithetical to an viable democratic society.” (Giroux, Animating Youth: The Disnification Of Childrens Culture, 1995) Within the film, the lions are represented high up in the hierarchy, contrasting the hyenas who live in ruins and poverty. This creates a racial hierarchy, if the representation of the hyenas are infact African Americans, that they are low down in social and cultural hierarchy.


This video of real hyenas shows that hyenas do infact ‘laugh’, one can see that their eyes appear blacked out with the colour of their fur, but in The Lion King their features are exaggerated such as the bulging eyes. The representation of the hyenas in The Lion King could infact just be an exaggeration of the real animals.

In this blog entry, I have uncovered the underlying racism within Disney films, which may allow children to see or recognise these representations in real life. Such racism does not go unnoticed.For example, descendants of Native Americans find it offensive when people mimic stereotypical actions that they have seen in films/animations, as it insults their culture. African American stereotypes and character representations have become recognisable outside of the film world, for example, when the child identified the African American children as the hyenas from ‘The Lion King’.

Giroux, H. (2010, August 4). How Disney Magic and the Corporate Media Shape Youth Identity in the Digital Age. Retrieved from Truth Out: http://www.truth-out.org/how-disney-magic-and-corporate-media-shape-youth-identity-digital-age62008

Herr, N. (n.d.). Television & Health. Retrieved from The Source Book For Teaching Science: http://www.csun.edu/science/health/docs/tv&health.html
Posted by Film Production at 11:51 AM