On November 25th, CBS’s “Early Show” covered Adam Lambert’s American Music Awards performance with a story that blurred his kiss with his male keyboardist. The story then showed the 2003 Madonna-Britney kiss from the MTV Video Music Awards uncensored. CBS released this statement regarding the double standard: 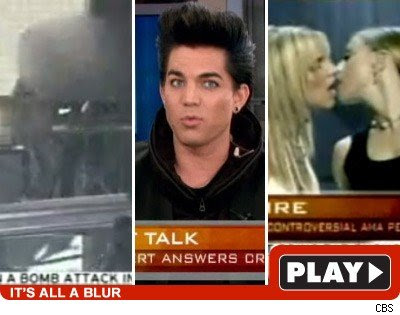 We gave this some real thought. The Madonna image is very familiar and has appeared countless times including many times on morning television. The Adam Lambert image is a subject of great current controversy, has not been nearly as widely disseminated,and for all we know, may still lead to legal consequences (Shea).

Not covered in this statement was Madonna and Britney Spears’ overt heterosexuality and Adam Lambert’s much flaunted homosexuality. It might be fair to argue that the Lambert performance was obscene except that pop music is built on selling sex, and award show performances often seem to compete in terms of “shockability.” Lambert and endless pop stars before him have done what has come to be expected of them – generate publicity through controversy (“For Your Entertainment: The Adam Lambert Controversy”). Spears and Madonna did this as pop stars in a very similar way in 2003, but without the same outcomes. This brings us to the question: Why was Lambert’s kiss blurred and not Madonna’s?

The simple answer could be that television still often upholds heterosexist norms and assumptions. While Madonna and Britney’s kiss could be deemed homosexual, in real terms, it is not. The kiss was a practice and was not reflecting a lifestyle (beyond a pop star lifestyle that requires controversy for survival). The two were gay pretenders and their homosexuality was temporary – not living beyond the kiss. When the kiss was over, the two returned to their heterosexual life of straight privilege, and so too did their heterosexual viewers who were mere voyeurs. Diane Raymond (2003) agues in Popular Culture and Queer Representation:

…how [shows involving gays] resolve tensions often results in a [rewriting] of heterosexuality and a ‘containment’ of queer sexuality, that is, that the resolution these programs offer enables viewers to distance themselves from the queer and therebyreturn to their comfortable positions as part of the dominant culture (99-100).

This means that while there is movement toward more tolerance of alternative lifestyles on television, it is only when they are contained and controlled. In his 2008 AfterElton blog, Brent Hartinger covered a long list of gay kisses on television, from Will & Grace to Greek, but all of the shows covered in the blog were scripted, making the kisses controlled by television producers and gatekeepers. Even reality shows have producers behind them choosing content. An unscripted kiss between two men, one of which is flamboyantly gay, on a major network is hardly contained. The censorship of the kiss by CBS on The Early Show, on the other hand, allowed for the distance Raymond described.
Adrienne Rich described popular culture’s tendency to portray heterosexuality as normal while portraying alternative sexualities as “other” as “compulsory heterosexuality” (Raymond 103). CBS’s censorship and non-censorship was just that, compulsory heterosexuality – the Madonna-Britney kiss was a heterosexual practice rather than a signal of a homosexual lifestyle. Kissing and lesbian play between women (regardless of actual sexuality) has come to serve as sexual entertainment for heterosexual males and, as such, has come to be as much a part of heterosexuality as homosexuality. Thus, The Madonna-Britney kiss was normalized and uncensored while Lambert’s was made a practice of the “other” by censorship.
Meaning is never fixed, and media consumers, regardless of resistance to dominant messages about sexuality, the family, and love, are still subjected to dominant ideologies’ messages about these lifestyles (Raymond 100). The meaning behind CBS’s actions on that November morning, if viewed as representative of mainstream culture, could be interpreted as: the dominant ideology still does not make room for true male homosexuality on commercial television.
Works Cited