Are Gay Men the New Women of Advertising? 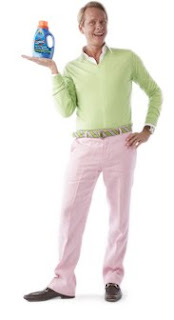 Carson Kressly, best known for his work on the show Queer Eye for the Straight Guy. He appears in an ad for Clorox 2 washing detergent. In the past in advertising, men were rarely if ever used as spokespeople for household products. Clorox did go against the grain by using Kresly, however in doing this, they are equating gay men and heterosexual women in their traditional role of homemaker. In doing this advertisers are saying that gay men and women can be used interchangeably and have similar household roles. One of the problems that arise when gay men are used this way is that it places them at a lower status, with women, and takes away the fact that they are males. The other problem with this is that it is in some ways a symbolic annihilation of gay men. In this case the men are being put in situations that 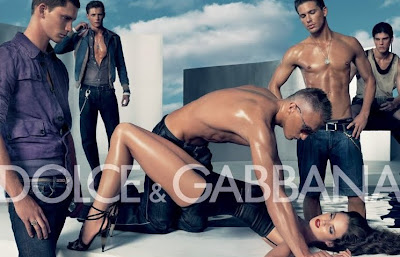 make them seem like women and it takes away from the fact that they are men and not just feminine gay stereotypes. This specific ad which is targeted towards women provides Kressly as an easily consumable figure of gay men.
Another trend in advertising that features gay men portrays them as extremely passive and hypersexual. For example, the ads for Dolce & Gabbana feature a group of men aggressively looking down at a passive woman, in the first ad, and a passive man, in the second. Not only do the ads show a sense of dominance over the passive figure, it also shows what appears to be a gang rape of the passive characters. The position of the passive characters is also important in these ads, the woman is positioned with her hips trusted, and the man is positioned with his legs open. 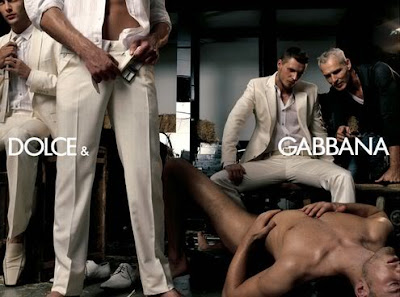 Over the years we have seen a rise in the number of openly gay figures in the pop culture and the media. However the way they have been portrayed has changed slightly. Gay men at one point were portrayed exclusively as a joking character, a buffoon or a negative figure. While those types of portrayals are still around today, we have seen a rise in the way that they are portrayed similarly to the way women have been. This may be because in our label obsessed society, for some people you have to fit into one of two categories, male or female. The problem with classifying gay males is that they have the physical characteristics of males, however they are attracted to males like females in our society are thought to do, and they are stereotypically flamboyant as women are thought to be. With this mentality, gay men by default are classified as women and not men.
The only way that there can be a change in the way that gay men are advertised is to create a different schema for gender roles. We need to be more receptive and understanding that people do not necessarily need to be classified into different groups in order for us to understand their roles in society.
Posted by Film Production at 8:38 AM