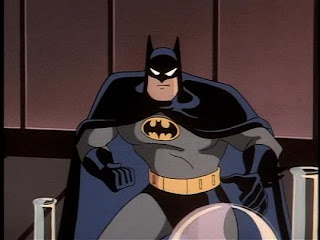 The Batman the caped crusader, the dark knight is the only super hero that does not have any supernatural powers to defeat his crazed enemies. Batman has been a popular mythical character to young boys since the 1950’s. In this blog entry, I will examine the specific characters portrayed in the Batman the Animated Series cartoon and how they construct masculinity and femininity.


Bruce Wayne is Gotham’s richest man and most eligible bachelor. He fits the ideology of everything that is good. Everything from his socioeconomic status to his physical physique is nearly flaw

less. His alter ego Batman never fails to save the city from the crazed maniacs that try to hurt the innocent people of Gotham. Physically Bruce Wayne is huge and does not have an ounce of fat on his body. His bat suit brings out all of Bruce’s overwhelming physical features. In fact most of the male characters in this series have a similar body type. Even though Bruce Wayne inherits all of his wealth from his Mother and Father and he is usually a very private person he is still very highly regarded even though he has little to do with the daily functions of the Wayne Corporation. The people of Gotham bow to him in two different forms either as himself or his alter ego Batman. Batman also has a protégé that he took in when his parents were slain Dick Grayson and his alter ego Robin.

Dick Grayson could be considered a miniature version of Bruce Wayne in every sense he also fits the ideology of everything that is good. He also has to grieve with the loss of his parents just as his mentor Bruce 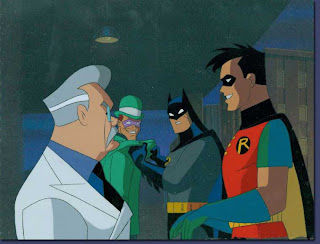 Wayne did. As Bruce’s closest confidant and the only other person who knows about his secret life besides his butler Alfred he stands to inherit all of Bruce’s wealth if anything happens to him. Dick is also a very popular figure on a smaller scale at Gotham University and is also sought after hard by most of the women on campus. Even Physically Grayson is a smaller version of Bruce with mostly the same facial features and the same cut up body without an ounce of fat. He is not as physically imposing looking as Bruce but he is still in great condition. Robin learns from Batman the way of the streets and about the mad villains that are trying to destroy Gotham. Robin is Batman’s sidekick in every sense of the word he does not get to drive the Bat mobile and is often never seen as the hero when both have a share in saving Gotham from whatever attack they face. Batman receives all or most of the credit. Any variation of Batman is not complete without some of the insane villains Batman faces off against.

The Joker is the arch nemesis of Batman and Robin and is the dynamic duos biggest threat. The Joker is the ideology in the show of everything that is bad. The Joker is horribly disfigured mentally and physically. The Joker has no feelings and will do anything to get laugh which usually means trying to hurt the people of Gotham and kill Batman. The Joker physically is not physically not very physically imposing he is tall and skinny. His skin is ghostly pale due to him falling into a vat of chemicals that made him go mad and changed his pigmentation. His clothing is also very different than that of Bruce Wayne he wears ugly purple suits while Bruce Wayne wears fine clothing and wears a high tech suit when he is Batman. While Bruce Wayne stays away from the bright lights of the media the Joker embraces the spotlight by high jacking TV stations to the people of Gotham can see his retched smiling face. Joker like most criminals has to steal all of his riches in order to perform his crimes. The Joker is seen as the bottom of the barrel and the scum of the earth who strikes fear into the people of Gotham.

The women of the show such as Selena Kyle/Cat woman, Pamela Eisley/ Poison Ivy, Harlene Quinzel/Harlequin and Barbara Gordon/Batgirl are all petite young and beautiful. They all have long flowing hair, rail thin stomachs, voluptuous hips and large breasts. These women are seen as objects to the powerful men in the show. The women are never seen as powerful until they change into their costumes and become their alter ego’s. 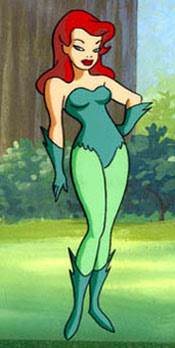 Pamela Eisley also known as Poison Ivy is an example of a women who only becomes powerful until she has a costume on. Pam dated Harvey Dent before he turned in 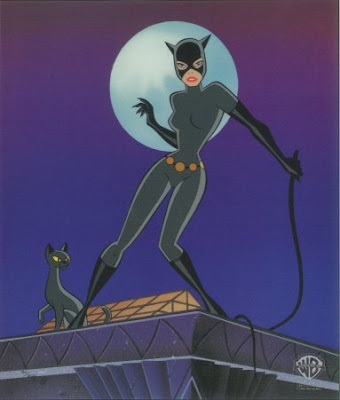 to Two Face and nearly killed him by poisoning him after Harvey wiped out an extinct plant. Pam before turning into Poison Ivy was just seen as a harmless beautiful girl that Harvey Dent dated. After this incident Pam becomes Poison Ivy and is one of the most dangerous and feared criminals in Gotham.

Selena Kyle also known as Catwoman is the object of Bruce Wayne’s affection for most of the show while Batman is the object of her affection when they are squaring off against one another. Selena is not really seen as a villain in the show because she does not side with the other villains and does all of her jobs independently. Selena much like the rest of the female characters is seen as a beautiful woman on Bruce Wayne’s arm until she changes into her cat suit. When she is Cat Woman she is a cat quick thief who is capable of taking on any male challenger. 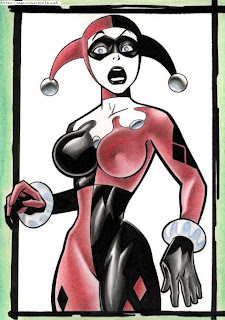 Harley Quinn is a former clinical psychologist whose mind has been warped by the Joker. Harley is madly in love with the Joker and will do anything to please him. She is considered to be of little threat at all just a beautiful woman that the joker cant flaunt and do some of his dirty work. In a particular episode Harley runs away from the Joker and captures batman and has him tied up over a tank of hungry piranhas. She calls the joker because she wants to show her what she has done. Harley thinks Joker will be proud of her accomplishment and they will kill Batman together. When joker enters the room he becomes enraged because she has came closer to killing Batman than he ever has. Joker cannot get over the fact that a woman did a better job than him on something that consumes his whole life.

Batman portrays many ideologies for both men and women in terms of what is right and what is wrong and how each sex should be indentified.
Posted by Film Production at 1:08 PM