A Shot at Love or a Shot at Fame: A SCWAMP Analysis of Tila Tequila

By Kristen Fisher
For two years, “A Shot at Love with Tila Tequila” was one of the most well known shows on MTV. According to Brian Stetler of the New York Times it was ranked number 12 on the list of top cable television shows, reigning in 4.2 million viewers. Tila is an Asian bi-sexual searching for love from either a man or a woman. The show consisted of sixteen straight men and sixteen lesbian women competing for “A Shot at Love with Tila Tequila”. With many straight reality dating shows out there, there was bound to eventually be a dating show to reach out to the gay community. A SCWAMP (Straight, Christian, White, Able-Bodied, Male, and Property holding) analysis allows us to see that most desired norms are not necessarily portrayed within this show (Grinner, 2004) .
Straight
The show centers on the issue that Tila Tequila is unsure if she prefers men or women. Tila is often seem having relations with either couple and even goes on dates that include one person of either sex going with her. The end of the first season Tila ended up choosing a man to spend her life with. However, the relationship did not last and she had a second season. At the end of the second season she chose a woman to be with. This further portrays that straightness is not necessarily the desired attribute since she chose differently the second time around.
http://www.youtube.com/watch?v=wHtJdWyS0tw
Within this show the ideal of straightness is not really a norm or what is desired. “A Shot at Love with Tila Tequila” attempts to display that ideal that love is more enviable than straightness; i.e. it does not matter whether you love the same or the opposite sex, as long as love is what is found. The idea that Tila is sexually aroused by either sex is a way to pull in a large male audience. The producers of the show may not actually care if Tila finds love or not, but using this idea pulls in a larger audience. Most dating shows have been formatted like the show “The Bachelor”, but this show pulls in a more curious audience since Tila is looking for “love” from either sex.
Christian
The idea of Christianity is not explicitly brought up within the show. However, many of the men on the show have tattoos of crosses showing that Christianity is indeed something that is a desirable trait to them. During one of the episodes Tila invites all of the women to go on a date with her. On this date she asks that they dress up like 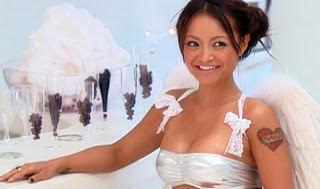 angels.
The imagery of angels is most often connected with the idea of heaven and Christianity. However, the acts that are performed while wearing these costumes would in no way be related with the images related to an angel. While wearing these outfits, Tila and the women drink heavily, and engage is sexual acts and discussion. These acts in no way promote the idea that Christianity is one of their higher desired characteristics because they in no way relate with common morals of Christianity.

White
In this show, whiteness is not displayed as most valued within our culture. Being that an Asian-American was chosen for the show is one main reason which portrays this. The show tends to commodify Tila’s female “Asian-ness” as purely sexual. This show tends to promote a common stereotype we may see within the media. This schema allows men to believe that since Tila is a very sexual and seductive woman, all other Asian women must be this way as well. This allows men to believe that Asian women may be more desirable, in a sexual way.
The contestants within the show are also of different races and backgrounds, furthering the idea that whiteness is not a solely desired characteristic. There is a larger White race within the men than any other race, but the way these men represent themselves is in a way that is not always associated with Whiteness. Most of these men dress and act in a stereotypical way often associated with Blackness. These men are all dominating, tough, and dress in ways often allied with “gangsters”. Since the White men tend to act in a Black way, this furthers the idea that Whiteness may not be such a high attribute.

Able-Bodied
Being able bodied is an attribute within the show that is very desirable. Tila put all of the different contestants up for many different challenges. In order to win these challenges, and win a one-on-one date with Tila, the contestant that is most able-bodied is always the most likely to win. Tila also often mentions how she likes women who are tough and aggressive. This idea of “toughness” goes along with being strong, fit and athletic. All of the men within the show are also very muscular furthering this ideal that being able-bodied is strongly desired.

Male
Men are in no way valued more than women within this show. Since Tila is a bi-sexual and unsure of which sex she prefers, both sexes are treated equally and equally desired. Both men and women had one giant bed to live in, and no certain sex was given any special privileges. At the end of both seasons the final two always ended up being a male and a female. Again, at the end of the first season Tila chose a male which may invite people to believe that men may be more valuable. However, the second season Tila chose a female ridding the idea that men are more desirable.

Property Holding
Being a property holder may not necessarily seem as something that is highly desirable within the show. Everyone within the show comes from many different backgrounds. Although Tila portrays herself as being a highly materialistic person, we are invited to believe the main reason she decided to do this show was because she was looking for love. They allow us to believe that Tila did not come on the show looking for any specific economic, intellectual, or cultural background, but rather she was looking for characteristics that allowed her to decide if she wanted to be with and love a male or a female. However, on the surface we may believe love is what is truly desirable to Tila, but by being on this show she acquires a lot of fame. We often see Tila wearing designer clothing and expensive jewelry. Seeing Tila enjoying a lifestyle such as that invites us to believe she really does enjoy expensive things and may actually prefer someone with a higher economical background. After each season none of Tila’s relationships ever work out. This furthering the idea that maybe she was not really looking for love, but rather the fame and glory of being on the show.

“A Shot at Love with Tila Tequila” invites us to believe that some values on the show may or may not be desirable. However, the show is there to make money and to please the audience. Whether they believe a certain quality is more desirable than another or not, they will put on a front to please their audience and keep them interested in a show. We might believe that Tila is looking for love, but the show is just putting on a front to reel in their audience.
Works Cited
Lind, R (Ed.). (2004). Race/Gender/Media. Chicago, Illinios: Pearson Education, Inc.
Stetler, Brian. (2007). Ratings: ‘Tila Tequila’ Closing in on ‘Spongebob Squarepants’. The New York Times,
Posted by Film Production at 1:27 PM