While gays, lesbians and bisexuals are portrayed more often on television than ever before, GLBTs are still the punch line in many shows. In this blog, I will analyze the relationship between two men, best friends, in the legal drama, Boston Legal . Boston Legal is a show that is now of the air, however it was a big hit when it first came out. This show was a spin-off of the hit legal drama “The Practice”. Boston Legal was nominated for many awards including Emmy nominations for best Drama Series twice, including its final season. The show was extremely liberal in its politics, as on a weekly bases it seemed to be tearing down George Bush and the Bush administration and the conservative ways of thinking in America in favor of new progressive ways of thinking. James Spader and William Shatner both gained a lot of respect from doing this show. During its run Spader won the Emmy for Outstanding Lead Actor in a Drama Series twice, and Shatner won best supporting actor once. Shanter also won a Golden Globe for best actor in a supporting role. James Spader plays a controversial lawyer names Alan Shore, who is known for his strange methods and progressive thinking. Meanwhile Williams Shatner plays a has been star lawyer named Denny Crane, who is only still at the firm because his name is on the door. Unlike Shore, Crane is extremely conservative and seems to represent the writer’s vision of Corporate America. The two are constructed as very straight, as they are both obsessed with women and sex. Much of the episodes feature steamy sex scenes the men have with various women. This show follows many of the conventions of the “buddy narrative.” The two men are close, but there are always women in the background to assure the audience that the men are heterosexual. Towards the end of the show, however, the characters steer away from the conventions of the buddy narrative, and confront the issue of their relationship head-on.

In this episode, Denny and Alan actually wind up sleeping together. Alan is actually having night terrors, and is sleep walking. One night, he wakes up at the edge of his balcony in a high rise apartment building. As a result, he asks Denny to come sleep with him to make sure he doesn’t hurt himself. Despite protests, Denny does come sleep with Alan. Alan winds up tying himself to Denny in order to avoid sleep walking. This leads to a rather humorous scene between the two, however, as 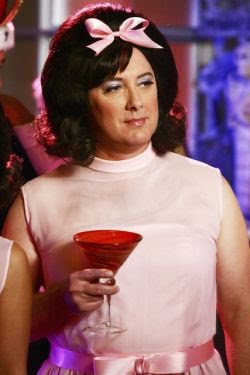 the series goes on it is Denny who is often times suggesting sleepovers to Alan, despite his original protests. This is a significant transformation for these two because they are very vulnerable characters. They have sexual relationships with women, but they struggle to make those relationships emotional and as a result the relationships are very short and stagnant. However, the willingness to sleep over more and more as the series goes on shows that the two are able to bond emotionally with each other, despite the fact they can not bond emotionally with women. As a result, the two are closer to each other than they could ever be with any woman.

Their relationship is hinted at in other episodes. For instance, at yearly Halloween parties, Alan and Denny usually dress in matching costumes. The costumes are usually of the girly variety. One year they dressed as pink flamingoes, another year they dressed as the Lennon sisters. They came to these parties together, dressed the same, and not in the manliest of costumes. In fact, in the final episode of the show, the relationship between Alan and Denny climaxed when Denny asked Alan to marry him so that he could protect his assets as he got older. Despites Alan’s uneasiness about the situation, the two are married by a Supreme Court Judge.

The implied homosexual relationship between Alan and Denny is a constant source of the show’s humor. And, while their heterosexuality is, overtly, guaranteed by the numerous scenes of heterosexual sex, the show does address the fluidity of sexuality, as much as in could, perhaps, in the main protagonists in a mainstream drama on network television.
Posted by Film Production at 8:52 AM