By: Amanda Shalkhauser
The birth of the Internet has changed the way people communicate and form communities (Cooper 2010). It has provided ways for people and groups to communicate in a wider sphere than just their surrounding neighborhoods; now individuals can collaborate across the globe. Because of this wide-reaching ability, the Internet is able to bring people together, enlighten and educate them. It also provides anonymity to users that can be liberating and provide security, but can also promote more aggressive behavior than people would normally assert in social situations.

This anonymity can easily “turn aggression into cyber-violence,” and the internet into a place that fuels hate and criticism of beliefs (Cooper 274). Internet users are more likely to “express anger and hatred they’d censor in a more public…accountable setting,” because they do not fear the criticism or disapproval that they would encounter in public (Cooper 274). The Internet’s empowering force has given life to many hate groups that flourish on the freedom found online. These include any group that thrives on “not merely disliking others but supporting (through words or actions) attempts to cause them harm” (Cooper 273). Politically, “hate defines communities exclusively by race, religion, ethnicity, or sexual orientation” (Cooper 273). This isolates groups such as Jews, African Americans, gays and lesbians, and continues the cycle of prejudice and discrimination against these groups.

The main focus of this blog post is on the hatred of gays and lesbians as shown on the Internet. The past few decades have seen a rise in the number of GLBT (Gay, Lesbian, Bisexual, Transgender) individuals coming out, expressing their sexuality and being accepted for it. With this growth in homosexuality and its acceptance, there has also been a rise in hate groups against homosexuals. These hate groups discriminate against gays and lesbians online, compare them to animals, remove their distinguishing features and categorize them into a groups of immoral, repulsive people with “dirty” sexual desires. Hate groups often use the Bible to promote this type of intolerance. Included in the category of homosexual hate groups are “Godhatesfags.com,” the “Family Research Council,” “Watchmen on the Wall,” and “The American Guardian,” just to name a few.

Scholars have already written about these and other anti-gay websites in texts about media influence, such as Cooper's "Cyber-Hate and the Disinhibiting Effects of Anti-gay speech on the Internet" chapter in a gender, race, and media textbook (Cooper 272). Anti-gay websites such as "Godhatesfags.com" and "Watchmen on the Wall" are relatively wide-reaching in their membership, and tend to be well known. What are less well known are the small websites and blogs, run by individuals or small groups, that preach the same message. Small-group websites and blogs can still encourage the same ideas, actions, and hate as more prominent websites, but on a smaller scale. This being said, blogs like the one in focus are worth analyzing in the same fashion as more prominent web pages. 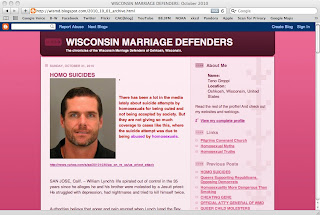 My focus is on a blog run by a Wisconsin man, Teno Groppi. He authors a blog called “Wisconsin Marriage Defenders,” on which he posts anti-gay articles followed by his own personal comments. His blog came up in a Google search of “anti-gay websites;” a woman posted that she had experienced this man walking around her town passing out anti-gay literature, in which he gave the link for his blog. A quick background search on Teno Groppi showed that he is a “King James Bible-believing Christian” who sticks heavily to the teachings of the Bible and seems to be thoroughly opposed to homosexuality.

His blog also links to the Pilgrims Covenant Church and a site titled “Homosexual Truths.” The Pilgrims Covenant Church website has a page devoted specifically to homosexuality, and pages and pages beyond that criticizing sodomites and claiming that homosexuals are Fascists trying to promote Fascism and crush all resistance to homosexuality in the United States. Ironically, the site also says that it is “not the intention of Pilgrims Covenant Church to provoke mindless hatred or violence against the sodomites. We urge you to pray for the sodomites…but do not underestimate the ferociousness of their commitment to crush all resistance to their cherished goals and do not neglect your duty to resist such an evil force” (“Pilgrims Covenant Church,” 2005); the group claims not to be hateful, but basically still is. The “Homosexual Truths” site is also discriminatory and includes many pages detailing the “truth” about homosexuality, including one post listing “Convincing Reasons why Homosexuals are Hellbound” (“Life and liberty,” 2004). Both of these pages are similar to one mentioned in Cynthia Cooper’s article in “Race/Gender/Media: Considering Diversity across Audiences, Content, and Producers.” She writes about the American Guardian website, which lists statistics claiming the bestiality and crudeness of homosexuals. These statistics include “68% of all mass murders are gay men; 92% of all homosexuals ingest feces at one time or another; and child sexual molestation is a defining characteristic of the homosexual lifestyle” (Cooper 275).

The “Wisconsin Marriage Defenders” blog includes many of the characteristics of anti-gay hate websites. On each article that Teno Groppi posts, he leaves his own comment. While most of the articles he posts are biased, untruthful and hateful, Groppi’s comments are even worse. He, like many others on anti-gay websites, focuses “on the sexual behaviors of gay men almost to the exclusion of all other aspects of gay life” (Cooper 274-275). A February post links Homosexuality and Bestiality, April and October posts both list the dangers of Homosexuality as related to AIDS and smoking, respectively, and a September post claims that child molesters are most often queer (Groopi 2004). “Wisconsin Marriage Defenders” “paint[s] a picture of gay life as one-dimensional, revolving around and insatiable need for “bizarre” sex” (Cooper 276). Groppi’s February 12, 2008 post by another “Wisconsin Marriage Defenders” group member goes on and on about how “disgusting” the homosexual “sodomites” are (Bible reference), how their actions are not “normal” and their relationships are not “loving” (Groppi). The whole post is about the “bizarre” and “unnatural” sexual actions that Groppi and his guest author seem to attribute to all homosexual males; the post is, in a sense, confining gay men to a singular negative trait and dehumanizing them without any facts to back up their claims.

Groppi, claims to be a devout religious man, and uses the Bible as a staple throughout his blog post as a way to promote his hatred of gays. He employs Bible passages or quotes like “that's the way God designed it, that's the way nature works” (referring to heterosexual marriage) in order to prove points (Groppi). Groppi justifies his (and his articles’) hatred of gays through teachings found in the Bible, specifically the story of Sodom and Gomorrah. Groppi has a tendency to post articles and comments that refer negatively to homosexuals, calling them “sodomites” like the sinning homosexuals whose city God destroys in Genesis of the Bible. (In fact, there is not one time that Groppi posts something in which the term “gay” or “homosexual” is used. Every reference made to homosexuals refers to them as “perverts,” “queers,” “lesbos,” or “sodomites,” and Groppi admits this fact (Groppi).) 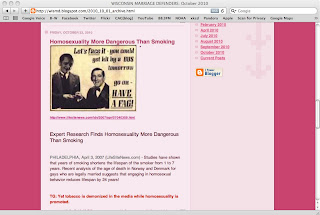 Groppi continues to insult and batter gays on his blog, even bringing political issues into the mix. In a January 2007 post, Groppi accuses all pro-gay city leaders in Madison, WI of being treasonous liars whose only goal is to revoke the state’s new gay marriage ban. The post’s title, “Pro-Queer Politicians Lie on Oaths,” gives the reader a completely overgeneralized and false idea of the characteristics of pro-gay marriage politicians, followed by a handful of unkind and untrue comments about the politicians. A good majority of the topics posted on “Wisconsin Marriage Defenders” are concerned similarly with the 2006 ban of same-sex marriage in Wisconsin. From his comments, it is clear that Groppi does not want the 2006 amendment to be overturned. He feels that by allowing same-sex marriage, what would prevent lawmakers from legalizing unions between humans and animals, bestiality, and rape? Law-making is a bit more complicated than that, but again, Groppi resorts to extreme overgeneralizations and assumptions.

In support of his anti-gay beliefs, Groppi and his fellow “Wisconsin Marriage Defenders” also hold rallies and pass out flyers detailing the “truth about homosexuality” while teaching a “strong gospel message” (Groppi). Photos and details about these events and how “Wisconsin Marriage Defenders” are “courageously taking on the sodomites” litter the blog site, calling to action others in support of their cause. Groppi also outlines the results of one of his “enlightening” rallies, quoting that “The first few days after our outing in Oshkosh, PCC [Pilgrims Covenant Church] received an avalanche of obscene, threatening, blasphemous phone calls from that city [Oshkosh, WI], confirming that the truth we shared was badly needed. Please pray for the Christians in Oshkosh who are taking their stand under a banner of biblical truth” (Groppi). Again, Groppi is using the Bible as justification for his actions and claims about other differently-minded people he encounters.

Teno Groppi authors a blog that can very much be considered an anti-gay hate website. The comments and articles he posts attempt to cause harm to homosexuals; he bestializes, dehumanizes, and criticizes them with no facts and nothing but the justification of his own beliefs and the words of the Bible. Groppi is sarcastic and nasty, he overgeneralizes and categorizes gays and calls them names. “Wisconsin Marriage Defenders” is affiliated with the Pilgrims Covenant Church of Wisconsin, and has many followers. Groppi uses these people to rally against same-sex marriage and anyone politically affiliated with it. All in all, Groppi’s “Wisconsin Marriage Defenders” blog is an obvious form of cyber-hate against gays. Luckily, most individuals know that the unsubstantiated claims and falsities on Groppi’s site are just that – false – and so this type of hateful and influential media can be avoided.