By: Lisa Morris
The act of women proposing to men rarely, if at all, is seen in the media. In the year of 1937, the comic strip “Li’l Abner” created a story in which a man’s daughter is desperately in search for a husband. The daughter, Sadie Hawkins, is 35 and her appearance is unappealing to men all around. Her father grew weary of her ever moving out, so he created an event called Sadie Hawkins Day. This day took place on February 29, which is also commonly known as leap year. On this particular day, a foot race was organized and when the gun fired the go signal, all the eligible bachelors in town had to start running. The second shot that was fired signaled Sadie’s cue to start running after the men. Whoever she caught, whether they wanted to or not, had to marry her. Now, every leap year, Sadie Hawkins Day is celebrated for the one opportunity for women to propose to men without seeming “desperate” (Mikkelson, 1995-2010). In this blog I will discuss how Sadie Hawkins Day marks a tradition that is unusual and disturbs the ideology of women. I will then discuss two examples of women proposals in the media, one which reveals the tendency of man to regain his dominant role, while the other relinquishes in success in regards to the female actually going through with her proposal.
Sadie Hawkins Day distinguishes the abnormality of women pursuing men. This event takes place on a day that occurs once every four years. According to the document “The Privilege of the Ladies”, leap years are seen as a disturbance to the “orderly progression of the days/months/years” (Mikkelson, 1995-2010). Just as February 29th is unordinary, events that are associated with it will get the same connotation. Since the extra day was added onto February to keep the calendar balanced, occurrences that take place out of the norm are not questioned. Our society is not used to women proposing to men, so when this happens, it is considered as an unnatural event.

In this picture, a woman is seen chasing a man, in hopes to capture him as her future husband. If she does so successfully, he has no choice but to marry her. First of all, a picture like this depicts the woman as desperate, chasing the male as he looks panicked, running away. The whole point of Sadie Hawkins Day is to give women the chance to pursue the opposite sex without seeming desperate. Isn’t it funny how women are given only a single day to do something that should be free reign for all? What’s even funnier is the fact that, even though Sadie Hawkins Day is an event for out of the ordinary behavior from women, it is still accepted by women. The reason it is still around today is because of the popularity it received. Perhaps women feel empowered when they are “allowed” to approach men, however they couldn’t be any farther from authority if they tried. Sadie Hawkins Day was created by a man for women, so even though it may appear to be an attempt at creating equality, it is in fact, on the contrary. To start, the first example of a woman attempting to propose to a man is in the popular television show “Friends”. 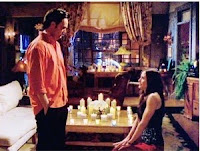 The episode starts off with Chandler trying to throw Monica off guard, saying he never wants to get married, in order to make his planned proposal a surprise. The problem is, his actions are actually turning Monica away from him and towards an old flame she previously dated. Chandler finally realizes he may have screwed things up with Monica, and runs home in hopes she has not left him for good. Joey stops him in the hall and tells him that he is too late and that Monica was gone. Chandler is in disbelief and enters the apartment, expecting no one to be there. Little to his surprise, Monica is inside waiting for him. She knew he wanted the proposal to be a surprise, so she did the one thing no one was expecting. Monica then gets down on one knee and the audience goes wild. As soon as it looks like she is about to ask Chandler to marry her, she stops and starts crying because her emotions are too much for her to handle. Then she says a quote that proves how uncommon women marriage proposals actually are which is, “There’s a reason girls don’t do this.” After she says that, Chandler automatically takes control saying that he will do it instead. After he chokes back a few romantic lines, he takes out a ring, and proposes to Monica.(See http://www.youtube.com/watch?v=nczQiEHcrWs) As an end result, there was no proposal made by a woman here, and the anticipation for one shows that we are eager to see the “impossible” probable. Chandler regains his dominant role and finishes what he had planned all along. The next example comes from the movie Leap Year.

In the film “Leap Year” Amy Adams sets out to fulfill an old Irish tradition too propose to her boyfriend. She has been waiting for him to propose, and on the night she “expects” him to do it, he gives her a gift instead. She then decides to take control and travel to Dublin where her boyfriend is at. She does not do this on any ordinary day though but instead she waits till Leap Year. Once again, this date is infamous for dominant role reversals. It is obvious how badly Amy Adams character wants to marry her boyfriend, so why can’t she just pop the question on any random day? She eventually gets caught up with the man that is driving her to see her boyfriend, and in the end, she never proposes. Instead, she falls in love with the other guy, thus eliminating the woman proposal.

It is an assumption that most women dream of their wedding day to be the most memorable moment in their lives. The irony of this situation is that men do not seem as thrilled about marriage as women, yet they are the ones expected to finalize the lifelong relationship. The reason for this is because of the rejection factor and the impression that women can’t handle it. So it is the man’s job to propose because apparently a man can handle rejection better than women. This goes along with masculinity and the fact that males are not expected to show emotions with the risk of destroying his ego, but that is a different argument. Women take pride in planning the wedding and making sure everything is perfect while the man is presumed to just sit back and relax. Since women take the dominant role in planning the event, it is absurd that popping the question is somewhat out of their reach. It is time to look past old traditions and make new ones; ones that defy the norms that have already been constructed. Sadie Hawkins Day was created nearly seventy years ago at a time completely different than today. Women have more power these days, but events such as this one lead viewers to see the distorted “truth”.